The 414 best physicians in the Puget Sound region,
as chosen by their peers. Seattle Magazine asked thousands of local doctors this question: To whom would you send a loved one for medical care? And more than 4,500 doctors submitted nearly 15,000 nominations. These are the doctors to whom other doctors turn when they or their families need care.

425 Magazine asked medical professionals to tell us which of their colleagues deserved recognition as a doctor who is making a big difference for folks on the Eastside.

The response was overwhelming.

The 425 editorial panel chose 10 medical professionals who were
going above and beyond the call of duty or who were leaders in their field.

Super Doctors identifies Washington State's top doctors as selected by their peers and the independent research of Key Professional Media.


In selecting physicians for Super Doctors, Key Professional Media employs a rigorous multi-step process designed to identify physicians who have attained a high degree of peer recognition and professional achievement. 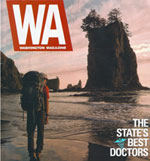 Only physicians identified by their peers in previous years as the “best doctors”
receive the Best Doctors in America survey.